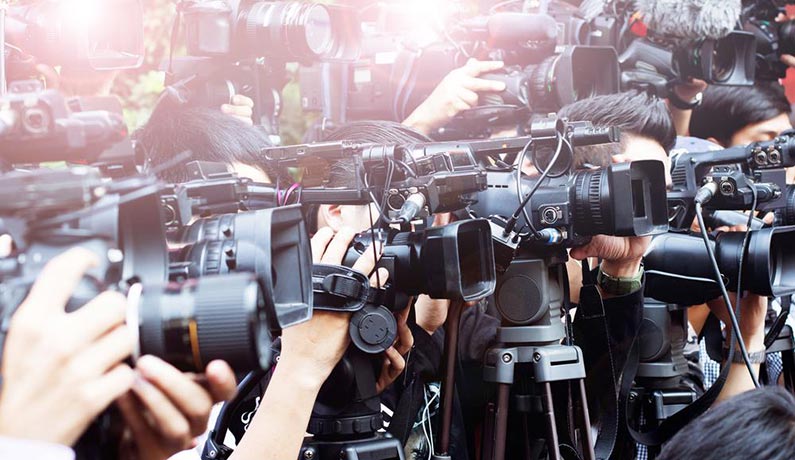 Have a look at this photo… Does it fill you with excitement or fear? Is your first reaction to rush towards the cameras or to run away from them?

The way you answer this question determines your approach to media work, which is unavoidable if you want to make it to the top in your sport.

Do you like to see your name in print and your face on TV?

When you love being in the limelight, there is a risk that you consider each journalist to be your best friend. But here’s news: they are not, ever, under any circumstances. Of course, I am not saying all journalists are terrible people. I even call a few journalists my friends! I am saying that while they are doing their job, your only value is to help them getting what they need to write their story. Whether or not that story will put you in the best of light really isn’t the journalist’s problem. On the contrary: the more controversial a story, the better it sells. So the more you say, the more opportunity you provide to be misquoted or to be portrayed in a way that’s good for the story but not necessarily for you.

Silence can be golden indeed

A few years back, I worked for the sport’s governing body. Everything we did or didn’t do was dissected by the media. Journalists always tried to speak to the federation’s employees when they needed a quote. Those who were not habilitated to talk to the media were particularly high in demand by some journalists who hoped that they might say things that those used to talking to the media never would. Example: One day, there was a big accident on track which luckily had no serious consequences. A journalist wandered up to an employee who had no media experience and asked casually if he thought the accident was really a serious one and if something worse could have happened. Instead of referring him to the press department which would have been the most elegant solution, he answered ‘yes, it was really a big one; potentially it could have been fatal, like all motorsport accidents really.’ The remark was innocent enough but the headline wasn’t. It read something like ‘Formula One: the deadly sport’. When you are the federation and in charge of safety on track, that’s a problem. Admittedly, in a small environment like motorsport, it doesn’t happen very often that a journalist doesn’t play by the rules. Not playing by the rules means you cannot be trusted and that’ll be the end of you getting quotes or even access. But his guy didn’t care as he was only there to cover one race and he clearly wanted to impress his boss. He was lucky to find an employee who was too trusting with no media experience. The employee was less lucky as I am sure he still remembers his angry boss…

You love the limelight – so what do you do?

To quote Jean-Claude van Damme: ‘Be aware’. Be aware of your words and how they might come across. But unless you are a pro and have been doing interviews and talks for a few years, this is a very difficult thing to do. So until you become a pro, use this advice that I got from my PR teacher:

If in doubt, leave it out!

Do journalists make you uncomfortable?

Usually, the reason is simple. You are a private person. But you happen to be a race driver and as such you need publicity to get ahead. That’s a real conundrum. However, there is good news. You can determine the way you deal with the media and decide how much or how little you share with the public. The bad news is that you will never be 100% comfortable. It is possible though to establish a relationship with the media that will make you feel more in control. Here’s how:

So what’s the best way to deal with journalists?

The answer is ‘be balanced’ because:

Doesn’t sound easy, I give you that. But media work is possible. Just like for any profession there are rules. So to establish a working relationship with the media, you need to learn those rules first. And then use the appropriate media and PR tools to make sure that the relationship is equitable. So the journalist gets the story and you get the publicity you want.