Motorsport PR – How to be a good communicator

We now live in a world where communication is king: in fact, we’re bombarded with it non-stop, day and night. In the past, even people in the public eye could get away with being reclusive introverts. Now, because of all the different ways there are in which to communicate, getting your message across artfully is an indispensable skill. It’s either that or disappear.

The good news for the publicity-shy is that communication doesn’t always have to take place directly. In fact, more often than not, it doesn’t. The digital age has well and truly overtaken traditional communication methods: even the standard e-mail press release has become an endangered species.

So what do you do instead if you want to talk to people? These days, especially if you’re a millennial, you get onto social media. And launch your website.

The power of social media cannot be underestimated. For example, global social media usage has gone up by 10% in the last year, which means that almost 42% of the world’s population is using at least one platform.

Being digitally eloquent is no longer enough

These are forms of digital communication that used to be called ‘new media’ but are no longer called that as they are nothing new. Of millennials, 90.4% use social media, with 77.5% of Generation X also actively using one platform or another. Even the Pope has embraced Twitter. 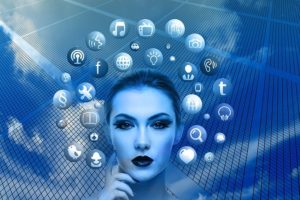 And that gives rise to a whole new problem. Because it’s not actually enough to be digitally eloquent. You also have to get people to listen – and that’s the really hard part. Just because Facebook still has the highest number of global users, doesn’t mean that people use it as their go-to platform of communication. Indeed, it’s quite the opposite.

Ironically, to communicate well, it’s important not to say too much. Because of the plethora of material out there, people don’t have the attention bandwidth that they used to.

Inboxes and Instagram feeds are in constant meltdown, so people tend to flick through their channels, reading only what grabs their attention – and even then, probably only the first few lines. That’s why Instagram is now the most popular communication option for personalities, as it can be absorbed more or less instantly.

You may feel you have plenty to say, but you need to get to the point immediately. As so much news is instantly out there, you no longer need to explain what happened – people will know this already – but merely give your take on it.

Make sure your communication is genuine

Focus exclusively on the content only you can provide. This gives people a reason to go to your channel rather than anywhere else.

Only you can provide your opinions, for example. Authenticity is more essential than ever to making your communications credible, thanks to the outbreak of ‘fake news’.

Naturally, you have to be engaging. But it’s easier to be engaging than ever before. If there’s something you don’t like, it can be filtered, edited, or juxtaposed with something else . How you present your communications is just as important as what they actually say.

And don’t worry if you feel you’re not polished enough. Communication is less formal than it used to be; instead it’s all about being yourself. Flaws and mistakes are allowed; encouraged even, as they are proof that your communications are genuine.

Simplicity is key, but make it your own

Remember that more and more people are now able to access your messages than ever before, including audiences that aren’t necessarily proficient in your native language, so keep it simple.

Feel free to be inspired by all the different ways that others communicate, but don’t consciously copy anyone: people will see through that instantly. Modern communications also allow you to share more of your life than ever before. While to some this might seem intrusive, it’s an opportunity worth taking. You can now invite people into your home, your office, your car – even your bathroom if you really want. The entire world sits at your fingertips.

To sum up: show people something that they wouldn’t see elsewhere and tell them things they wouldn’t hear elsewhere. Keep it concise, simple, honest, personal, and striking. These are the golden rules to being an effective communicator in the modern age.